brightonfloorsandingThere comes a time in every wood floor’s life when a simple cleaning will no longer give the floor the life it deserves. Your wood floor begins to detract from the overall feel of the room.

When this happens, you may think that you need to replace your entire floor, which is a costly endeavor. Luckily, there are companies like GJP Floor Sanding London that will come in and assess the damage. In all likelihood, they will recommend that you simply restore your wood floor to bring it back to its original glory.

Bring back the shine and improve the look of your room without breaking the budget. The Following is a brief overview of the wood floor restoration process. 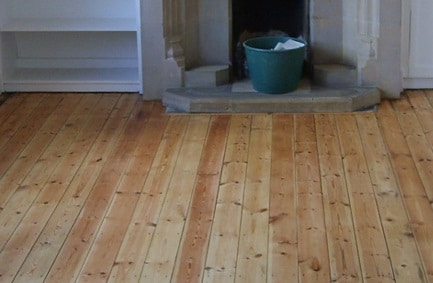 The first thing is to assess your floor and determine if you are just dealing with light scratches and normal wear and tear. If no repairs are needed then we can simply remove the stains, paint, etc. with an approved floor cleaner.

Our team will happily sweep and ensure that there is no debris on the floor. Leaving granules of sand can cause scratches and other issues during the buffing process.

During this step a buffer will be used to do a light scuff-sand of your floors. Basically, this will remove a light layer from the original finish of the floor, readying it for the restoration process.

After screening or buffing the floor, it will have a dull look and quite possibly a lot of dust. Using a soft attachment on our dust containment system, we will suck up all the debris, dust and dirt. It is important to ensure that the floor is spotless before applying the finish.

Sealing the floor isn’t always required. However, if your floor doesn’t appear to be soaking up the stain evenly then it will be wise to apply a sealant. It never hurts to seal the floor as it does create a nice even look and it also protects your wooden floor.

Now it is time to apply the stain or oil that was previously used on your wooden floor. Our London floor sanding team will always apply a couple of thin coats as this is better than using one thick coat of stain.

This is a brief overview of the entire restoration process. Of course, there could be some deviations from this general plan, or some enhancements, but this is typically the process for all wood floor restoration jobs.

Gjp Floor Sanding London offers Wood Floor Restoration services in London.
London is a Capital City located in Greater London in England.
London's main attractions include Three Mills, Hatton Garden, Canary Wharf, and River Thames.
London is well known for its many rivers and waterways including River Thames, Kensington Canal, and London River Services.
London's council/local authority is a Devolution In The United Kingdom.
London is located in Greater London.
London is associated with county districts including Dormers Wells, Beckton, Camden Town, Woodlands, and Friern Barnet.
Administrative ward subdivisions of a London also include Brentford, Teddington, Barnes, and Kew.
The Capital City of London is representated at a national level by Westminster (UK Parliament constituency), Chelsea (UK Parliament constituency), Westminster Abbey (UK Parliament constituency), Kensington and Chelsea (UK Parliament constituency), and Paddington North (UK Parliament constituency).
The Capital City of London also amalgamated villages such as Arkley, and Harefield within its boundaries.
London is formed by a number of settlements including Upper Norwood, Chislehurst, Finchley, North Acton, Little Venice, Stonebridge, and Nag's Head.
Shepherd's Bush, Fulham, Church End, Acton, and Worcester Park are included withinin Gjp Floor Sanding London's Wood Floor Restoration service area in the Capital City of London.
Other primary service areas of Gjp Floor Sanding London within in London, England accommodate Harold Wood, Kensal Town, Norbury, Acton Green, and Lower Morden,
as well as London's outer urban areas Soho, Shoreditch, Stroud Green, Chadwell Heath, and Cottenham Park.
Last but not least Gjp Floor Sanding London's Wood Floor Restoration services cover the greater London area including Wood Green, Pitshanger, Wealdstone, Harrow, and Angel.
Suburbs of London, Greater London, include Bloomsbury, Ardleigh Green, Northwood, Ealing, and World's End.
Towns such as Highgate, Harlesden, Church End, Greenford, and Perivale are are part of London.
Other towns including Westminster, Croydon, Uxbridge, Enfield Town, and Woolwich can be found within the Capital City of London.
Lister Institute of Preventive Medicine, and Institute of Cancer Research found within London are respected through out England and the United Kingdom.
London has a number of schools in the area including Lady Margaret School, and Sussex House School.
Provide a physical education forum within London is the Saatchi Gallery, and Design Museum.
Hans Place, Wimbledon Park, and Cadogan Place are enjoyed by London residents and famous through out England.
Essential roads and infasructure in London include Seven Sisters, Angel, and King's Road.
Unusual (and unique) places within London include Statue of Charles II, Royal Hospital Chelsea.
Structures and Buildings of special interest within London include West House, Stamford Bridge (stadium), Hans Place, Embassy of Spain, and Broadwater Farm.
A number of churches are located in London including Chelsea Academy, St Mary's, and Lady Margaret School.
Included in the long history of London are Croydon, Vauxhall, Thomas Faulkner (topographer), Three Mills, and Merton (parish).
Canary Wharf are London's main business districts.
The Capital City of London is home to a number of businesses including Wilkinson Sword, Chelsea Bun House, and Granny Takes a Trip.
London is a centre of commerce and shopping centers such as Granny Takes a Trip are famous.
Why not give us a call today

for free floor restoration advice or an obligation free quote?